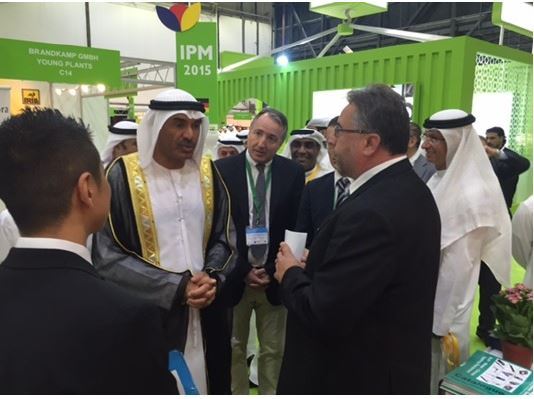 The IPM Dubai 2015 has finished with a significant increase in exhibitors. The atmosphere at the German pavilion was also overall good. “It has manifested very clearly that horticulture has been increasingly focused on in the Emirates and neighboring countries. The self-supply with fresh vegetables stands definitively on top “, concludes Harald Braungardt (photo with His Excellency Hussain Nasser Lootah, Director General, Dubai Municipality).

The short seminars of INDEGA members also received very positive evaluation from the visitors. However, the speakers deplored the small number of listeners. “There should be longer communicated and announced in advance next time,” says Braungardt.
Visitors came from the Gulf region, including Saudi Arabia, but also from further afield, for example, Iran and Lebanon. The number of visitors was satisfactory, the quality was very high.

It should be noted that the plant production increases in the Gulf States and the assortment depth experiences growth, too. On a positive note is the number of exhibitors, which has significantly risen by approximately 25 percent – that makes the show more interesting for visitors. I hope that this positive trend will continue.