The Hortiflorexpo IPM Shanghai has ended with a new record number of visitors, 19,280 visitors from 27 countries came to the Shanghai New International Expo Center. The INDEGA was represented with a total of 11 companies on the German joint stand of the Federal Ministry of Food and Agriculture (FMFA). From INDEGA participated: STEP Systems, Gefoma, IPM Messe Essen, Lehei, Pöppelmann, Terracult and Ziegler.

This time Harald Braungardt acted as an official informant of the FMFA and was very pleased that the Ministry was also present in China, with Tanya Geik as it’s official representative.

“The Hortiflorexpo IPM Shanghai has significantly succeeded to expand its leading position as the most important horticultural exhibition in China. The need for investment is enormous due to the high demand for flowers and plants. The show has benefited noticeably from this, and could at the same time set a new impetus for the green industry“, says Oliver P. Kuhrt, CEO of Messe Essen and thus a Co-organiser of the fair, about the successful event. 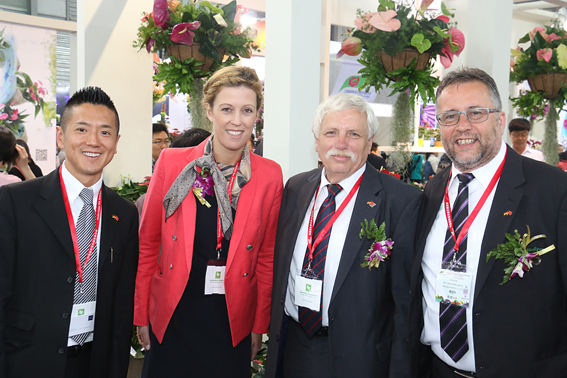